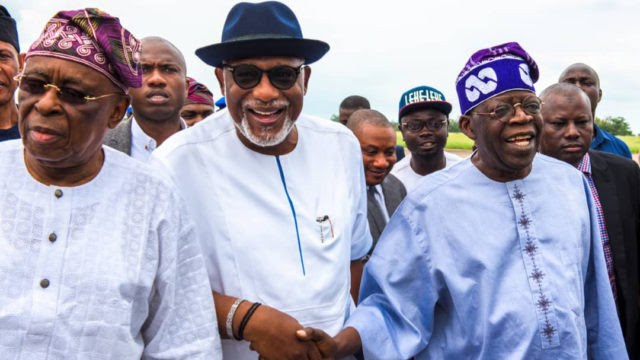 Some aggrieved members of the Ondo State chapter of the All Progressives Congress have insisted the recent meeting in Akure between the National Leader of the party, Asiwaju Ahmed Tinubu, and APC leaders in the state to resolve the crisis in the state branch of the party did not address the real problems.

After the meeting, Tinubu and Akande said the aim of the meeting was to unite the party members in a bid to win future elections in the state.

However, one of the aggrieved members of the party in the state told our correspondent on condition of anonymity that Tinubu and other leaders came to the state for personal reasons.

He said, “I don’t think Tinubu came to Ondo State to reconcile the warring factions, he came to reconcile with the leaders he has problems with. But obviously not to settle the Ondo crisis.

“At the meeting, Akeredolu was asked to expand his government to accommodate the aggrieved members and also to make the state executive of the party all-inclusive. What we want is for state executive to be dissolved and a caretaker committee put in place.

“If the two factions came up with certain terms for reconciliation but none of the terms was agreed upon at the meeting, so what are they reconciling? If they say the state exco should be all-inclusive, I say how does this work?”